When thinking about a child playing constructively, the image of using lego blocks to build a spaceship, or shaping sand into a sandcastle on the beach, may come to mind. These two tasks are extremely complex. The skills necessary to complete these activities require years of experimentation and repetition to achieve.

Children should be given the basic building blocks to play constructively at a young age. Understanding how each of these skills emerge is imperative. Constructive play skills build on each other.  Here is a typical progression of skills related to constructive play:

Constructive play begins with a child first learning to put one object inside another. As a child gains fine and gross motor skills, he or she becomes able to move objects from one hand to another. The child places objects between spaces, isolates a finger, and finds tiny holes in objects.

Cause and Effect, Object Permanence

Putting It All Together

Children may initiate stacking with two objects at about one and a half years of age. Complex stacking and building structures begin after a child reaches two years of age and older. The ability to adjust the position of an object, depending on its surroundings, leads to being able to work a shape sorter or puzzle, build a tower with blocks, and snapping beads together.

It is important to remember the stages of the Dynamic Learning Circle, so that you can identify and eliminate barriers, fill in missing gaps, and promote continued learning. 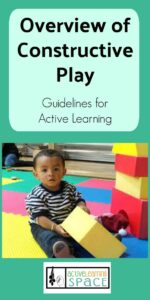