Many children with significant multiple disabilities also have cortical visual impairment (CVI) and thus the question often arises about how to adapt Active Learning materials and an Active Learning approach for these learners.  It is important to remember that not all sensory areas are addressed during a single activity and, thus, vision may be the emphasis during one activity, but then fine motor skills may be the main focus in a different activity.  This means that, for example, if a child with CVI is in a Little Room, this might be overwhelming from a visual perspective, but the emphasis during that particular activity might be on reaching and grasping, comparing objects, and crossing midline.  During another time, the emphasis might be on vision, and during that time the use of a black background, spotlighting, minimizing visual clutter, and using familiar high contrast materials in a child’s preferred color might be the best approach.  The team should discuss which priorities to focus on during specific tasks and activities to decide how best to arrange the environment at a given time.

How should Active Learning materials be presented to a learner with CVI?

In the photo you see a child with CVI is working on independent sitting. He visually functions in Phase one, with a CVI score of 1 to 2. He is sitting on an Essef Board and the primary goal of this activity is gross motor, not vision.  Because of his CVI, items have been placed against a black background, and some of the items have been selected for their reflective properties, colors, and light.  Note that when the focus of an activity for a child with CVI is visual, the number of materials that are typically made available would be minimal.  In Active Learning, however, many items are typically presented at the same time, thereby allowing the child to interact with a variety of materials and their special features.  Thus, there is no single way to set up a learning environment for a learner with CVI.  Instead, a decision should be made by the team, based on the goal (s) of a specific activity.

Activity Ideas from the Field

Setting Up the Classroom

Taking a Look at the FIELA Curriculum

We have developed this flyer about Active Learning and Cortical Visual Impairment that you may wish to download.

What did Dr. Lilli Nielsen say about learners with cortical visual impairment (CVI)?

Dr. Nielsen herself wrote a number of articles about CVI, and the links are provided below.  It should be noted that a great deal has been learned about CVI since these were written in the early 90s.  A number of activities and strategies are also included below and we will continue to add more.

Scottish Sensory Centre (This article was published in “Refsnaes-Nyt”, No 38, September 1993.)
Dr. Nielsen begins by noting that we know very little about cortical visual impairment (although in the 24 years since she wrote this article, a great deal has been learned about CVI).  She discusses that bombarding a child with visual information may be so overwhelming that the child will refuse to look at it.  She also mentions that many children with multiple disabilities have difficulty generalizing information to new situations, and “it seems meaningless to provide the child with environments that he will never meet outside the vision training room.”

Dr. Nielsen discusses the difficulty in knowing exactly what a child with cortical visual impairment can see.  She also notes that many children with visual impairment who are at an early developmental stage do not experiment with all sensory combinations at one time.  She emphasizes the importance of observing children with CVI, noting when they look at something, what attributes the item they’re looking at has, background color, etc.  Dr. Nielsen maintains that “we can still arrange the surroundings in various settings to enable the child to learn to see, that is, to utilize his residual sight while he: plays, experiments, combines visual experiences with other sensory experiences and compares visual experiences, and to do so whether he is in a supine or prone position, or is sitting, standing or walking.”

Cortical Vision Impairment: Using the Sense of Sight as a Secondary Sensory Modality

Scottish Sensory Centre (This article first appeared in Danish in Refsnaes-Nyt, no 41, 1994.)

Dr. Nielsen shares her observations of several children with CVI that seem to show that they are busy using other sensory modalities while they are not using their sight. She notes that some children need to explore the auditory and tactile qualities of an object before they can benefit from looking at it.  She notes that “Some children with CVI may later become able to include the sense of sight when exploring, experimenting and experiencing an exciting object or event for the first time – others will maybe never achieve this ability.”  She emphasizes the importance of identifying which of the child’s sensory modalities is primary, while also determining which stage of the learning process the child is in.

Webinar on CVI and Active Learning 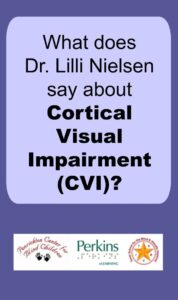