The HOPSA-dress (H-d) is designed to give wheelchair users the opportunity to move their legs, learning to bear their own weight, balance while standing, and achieve the ability to walk.

The H-d is manufactured in three sizes to fit persons 1-7 years of age, 7-14, and adults. It is attached to a crossbar with chain, or a crossbar and block suspension hanging from a track that is securely attached to the ceiling. A track placed parallel to, and at a distance of 50-60 cm from the wall will create the opportunity for placing materials within reach of the learner in the H-d and so promote learning. The shoulder straps should be fastened as close as possible to the learner’s shoulders, while the body belt must be tightened sufficiently to fit snuggly.

Things You Can Buy

Things You Can Make

In the beginning the H-d is elevated to a point allowing the learner to just touch the floor or the material placed underfoot. Several beginners would have been using a wheelchair for years. This causes the tendons of the knees to become so short that it is natural to have bent knees while in the H-d during the first weeks or months of daily exercise. As the learner becomes use to moving his legs and feet the tendons will extend. This will determine how high above the floor the learner should be placed. If placed too low, the learner will be forced to support his weight by pressing the feet towards the floor. This will restrict movement and the further development of muscle strength.

Some learners need to be introduced to the H-d gradually. They can tolerate the impact of the new experience of being upright, and the ability to move, for short periods only. For these learners it would be better to remain in the H-d for a few minutes only, with 2-3 repetitions per total learning session. After a few short periods in the H-d the majority of learners will show that a longer period of time in the H-d can be endured.

The environment should be arranged according to the learner’s developmental level and interest in order to be meaningful. Arrange the environment in such a way that both feet and hands can be active. The majority of learners need to start with touching the available materials using their toes only. Big trays each containing a specific substance, such as, marbles, beans, chains with beads, corrugated cardboard, gravel and ribbed rubber mats, provide opportunities for varied experiences and comparison.

Note that the sequence for introducing a HOPSA Dress is to start on a single point eye hook, then move to a straight track, then finally to an “H” track.

In the beginning some learners find it difficult to move their legs. They are also unfamiliar with the vertical position. As a result the skin of their legs/feet become red and blue. Often they also have very cold feet. In such cases it would help to place his feet in a vibrating foot spa with warm water while in the H-d. The vibration will stimulate blood circulation in the leg muscles and encourage movement. If the learner’s feet are very cold, massaging with peppermint oil just before exercising the legs and feet will be helpful. Increasing movement leads to increasing contractions in the veins, the blood is pumped upwards and the skin color returns to normal. 10 Some learners initially experience a tightness or soreness in the crotch as they are unfamiliar with their body pressing against the under-part of the H-d. This can be relieved by a piece of fur, foam rubber or other soft material. The problem usually disappears after a short period of time.

Altering the Height of the HOPSA-dress

Having used the H-d for a while the learner will start to put weight on one leg at a time. This in now the time to lower the H-d one or two centimeters enabling him to push a flat foot against the floor and to exercise flexing the ankles. The H-d must still be high enough to prevent full weight bearing. Having developed sufficient muscle strength to bear his own weight, the learner will still need daily exercise in the H-d to allow free coordination of arm and leg movements while practicing the ability to balance and walk.

The learner also achieves an enhanced feeling of independence because he gradually experiences that he can perform more and more functions without the help of another person (a parent, teacher, therapist, or others.) Ample opportunities to explore his environment, to experiment with objects within reach of hands and feet, and to decide when and how far he wants to move, according to the length of the overhead track, are provided. Learners with many spastic reactions in arms and or legs are provided with opportunities to learn to counteract the spastic reactions, and so achieve better control over their movements.

The use of the HOPSA-dress is demonstrated on a video produced by VIDECOM, St. Gallen, Switzerland with the title of “Percetualyzing Aids – Why, How, and When?”

The HOPSA-dress has been in use since 1989, and is now being used worldwide. Several of the users who were 8-10 years old when they commenced to use the H-d were able to walk independently at the age of 12-14. The learners who, because of specific motor handicap(s) have not yet learned to walk without the support of the H-d, still benefited as stated in the paragraph dealing with benefits. The justification for exposing the user of a wheelchair to the H-d is to be founded in the physical and emotional improvements observed in the particular learners.

Description: A young man using a HOPSA dress and Essef Board.

Original webcast date: 09/01/2016
Description: Jack uses a HOPSA dress and explores, both, beads and spoons attached to the dress and crinkle paper, plastic pegs and rice in containers under his feet. 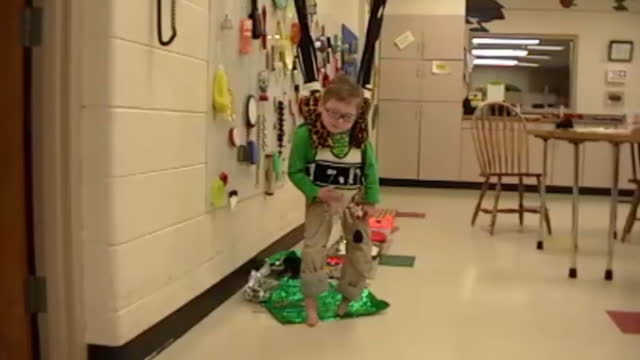 Here is a simple science lesson taught in an environment using a HOPSA dress. When this video was made, Sonya had been using the HOPSA dress for more than two years, but had never moved more than a few feet. It took years of practice moving just very short distances, and over time she developed an understanding of the spatial relationship of where she was in the room.  She is demonstrating the cognitive skills necessary to “trail furniture” or “cruise on furniture” even though she doesn’t have the physical skills to do so.  You will see in the video that Sonya has poor head control and she is working on lifting her head up in a standing position while in the HOPSA dress.

Sonya has one hip out of socket, but uses the other leg to move herself around the room. Her orthopedic surgeon is aware of the position of her hips and agreed that the use of the HOPSA dress was a good idea, as it encourages her to move her legs (as well as other body parts).  Sonya is unable to roll over or sit up by herself, but in this video we see that in the HOPSA dress she is able to move around and explore her environment independently.