Oral motor skill development refers to the use and function of the lips, tongue, hard and soft palates, jaw, and teeth.  The movement and coordination of these structures is very important in speech production, safe swallowing, and consuming various food items.

Normal oral motor development begins prior to birth and continues beyond the age of three.  By age four, most children can safely consume solids and liquids without choking.  Children with special needs can frequently exhibit immature oral motor skills.  For these children, it is important that an active learning curriculum include daily participation in oral motor activities.

Active learning environments such as the Little Room, Support Bench, Essef Board and HOPSA dress provide enriched opportunities for a child to learn to move.  In these environments a child can gain the ability to lift the head, stabilize the shoulders, rotate the trunk, use the arms and hands, and reciprocally move the legs.  As a child learns to move one body part, similar movement patterns can be learned by another part of the body, including the mouth.

Before you can go into detail about various types of oral motor activities, you need to have a basic understanding of oral motor development.  We encourage you to refer to your occupational therapist and speech pathologist for a more detailed explanation and help in understanding where your student is in his or her oral motor development.   Prior to working with any special needs child with oral motor problems, a proper assessment should be completed, which may include medical testing, such as a swallow study.

Oral motor development begins in utero.  By 7 weeks of gestation, the fetus develops lips.  By 12 weeks the fetus begins to suck and swallow.  When the fetus’ lips come in contact with the developing hand at 13 weeks, it begins to suck on the thumb.  The Active Learning process has already begun. By 24 weeks the fetus will suck and swallow approximately one liter of amniotic fluid per day.  The brainstem matures by 35 weeks and finally by 37 weeks oral motor reflexes including the rooting, suckling, tongue, swallowing, bite, gag, and transverse tongue reflexes are already present.  At birth, the infant comes ready with the developmental skills necessary to coordinate breathing, sucking and swallowing.

An infant from birth to three months of age spends most of his or her day in a reclined position.  The infant is introduced to liquids only and uses an in and out motion of the tongue, or a suckle, to move liquids in the mouth.  The tongue may protrude out of the mouth, and the infant is working to coordinate the suck and swallow with breathing.

Think about the activities the infant age birth to three months engages in.  The child is developing head control and flexion of the body.  These patterns include moving the chin to the chest, moving the arms into midline, bending the knees and bringing the legs up toward the body.  The development of flexion patterns helps to bring stability to the trunk, pelvis and head.

For refined motor development to occur, the body must have stability to gain mobility.  Stability usually develops proximal to distal – or from close to the body to farther away from the body.  Movement patterns will evolve from gross skills, such as moving the arm, to fine skills such as grasping with the fingers.  Oral motor skill progression occurs in the same manner.

A child four to six months of age moves from a semi-recline position to a more upright position.  This child has gained the ability to roll over and is beginning to sit upright.  There is increased trunk stability and strength.  Typically, children who are unable to roll over are fed with formula/milk and may be beginning to suckle thinner, very smooth purees off of a spoon. A child who is able to sit up  is introduced to thicker/lumpier pureed foods.  The tongue begins to move up and down instead of in and out.  At this age, the social aspect of eating is also more apparent.

At six to eight months of age, the child is able get into a seated position independently and usually begins to crawl.  He or she is eating while upright and table mashed foods are introduced.  Reciprocal movements of the extremities are observed, and these more complex movements are also seen in the mouth.

Once a child can weight shift at the hips, he or she can begin to weight shift at the lips. The tongue not only moves up and down, but begins to move laterally to the sides of the mouth.  A phasic bite and release or rapid up and down movement of the jaw is seen.  This child is also introduced to a sippy cup for the first time.

Development at Eight to Twelve Months

Development at Twelve to Eighteen Months

Lastly, the child 12 months to 18 months learns to chew with his or her lips closed.  This child is a mobile child, walking independently.  Table foods are offered, although meats are still chopped.  A straw is introduced, and the child does not need to extend the neck when accepting food.

Children normally mouth objects including their own hands and feet. They do this for a number of reasons that include:

Children with significant developmental delays often continue to mouth beyond an age that is thought to be appropriate. In fact, people often want to stop mouthing, but this is an important channel for learning, especially if the child is visually impaired or has limited hand use.

Touching objects with one’s mouth (oral exploration or ‘mouthing’) is a primary means of tactual exploration and an important source of information for infants (Bushnell & Boudreau, 1991). Mouthing objects is part of typical development, preceding object exploration with hands alone or in combination with visual regard (Schiff & Foulke, 1982). In early development, infants display more complicated actions with the mouth than with the hands (Bushnell & Boudreau, 1993). Infants engage in different patterns of oral responses when exploring or sucking, and with age expend more time exploring (Rochat, 1983). Through mouthing, infants can perceive hardness, texture, and shape, and this object knowledge can be transferred across sensory modalities (E. J. Gibson & Walker, 1984; Meltzoff & Borton, 1979). Furthermore, the actions infants display with the mouth (i.e., cyclically pressing the tongue against the roof of the mouth and drawing it backwards over the surface of the mouthed object), are analogous to the type of hand movements older children use when perceiving texture and hardness with the hands (i.e., pressure and lateral motion) (Bushnell & Boudreau, 1993).

“Tactile perception by mouth: Perceiving properties of objects when vision is impaired.” 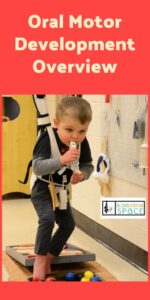